Central Board of Secondary Education (CBSE) issues syllabus and conducts all exams of CBSE Board.

Recently CBSE Released Subject wise syllabus of all subject of 2021-22 . This is revised of previous years and Reduced about  30%. The Students of Class 12th are suggested to have a depth knowledge of each subject’s Syllabus. Because a good knowledge of syllabus is Half Success. 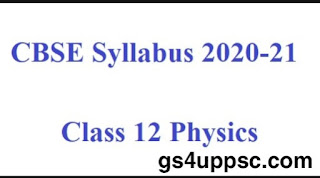 Here we will discuss about the syllabus of 12th Standard Physics Subject of 2021-22.

Electric flux, statement of Gauss’s theorem and its applications to find field due to infinitely long straight wire, uniformly charged infinite plane sheet and uniformly charged thin spherical shell (field inside and outside).

Conductors and insulators, free charges and bound charges inside a conductor. Dielectrics and electric polarization, capacitors and capacitance, combination of capacitors in series and in parallel, capacitance of a parallel plate capacitor with and without dielectric medium between the plates, energy stored in a capacitor.

Internal resistance of a cell, potential difference and emf of a cell,combination of cells in series and in parallel. Kirchhoff’s laws and simple applications. Wheatstone bridge, metre bridge.

Potentiometer – principle and its applications to measure potential difference and for comparing emf of two cells; measurement of internal resistance of a cell.

Ampere’s law and its applications to infinitely long straight wire. Straight and toroidal solenoids, Force on a moving charge in uniform magnetic and electric fields. Cyclotron.

Self and mutual induction.

Scattering of light – blue colour of sky and reddish appearance of the sun at sunrise and sunset.

Optical instruments: Microscopes and astronomical telescopes (reflecting and refracting) and their magnifying powers.

Matter waves-wave nature of particles, de Broglie relation. Davisson-Germer experiment (experimental details should be omitted; only conclusion should be explained).

Energy bands in conductors, semiconductors and insulators (qualitative ideas only)

Semiconductor diode – I-V characteristics in forward and reverse bias, diode as a rectifier;

Junction transistor, transistor action, characteristics of a transistor and transistor as an amplifier (common emitter configuration), basic idea of analog and digital signals, Logic gates (OR, AND, NOT, NAND and NOR).

1. To determine the resistance per cm of a given wire by plotting a graph for potential difference versus current.

2. To find the resistance of a given wire using metre bridge and hence determine the resistivity (specific resistance) of its material.

3. To verify the laws of combination (series) of resistances using a metre bridge.

To verify the laws of combination (parallel) of resistances using a metre bridge.

4. To compare the EMF of two given primary cells using potentiometer.

5. To determine the internal resistance of given primary cell using potentiometer.

6. To determine the resistance of a galvanometer by half-deflection method and  to find its figure of merit.

8. To convert the given galvanometer (of known resistance and figure of merit) into a voltmeter of desired range and to verify the same.

To convert the given galvanometer (of known resistance and figure of merit) into an ammeter of desired range and to verify the same.

9. To find the frequency of AC mains with a sonometer.

1. To find the value of v for different values of u in case of a concave mirror and to find the focal length.

2. To find the focal length of a convex mirror, using a convex lens.

3. To find the focal length of a convex lens by plotting graphs between u and v or between 1/u and 1/v.

4. To find the focal length of a concave lens, using a convex lens.

5. To determine the angle of minimum deviation for a given prism by plotting a graph between angle of incidence and angle of deviation.

6. To determine the refractive index of a glass slab using a travelling microscope.

7. To find the refractive index of a liquid by using a convex lens and plane mirror.

8. To draw the I-V characteristic curve for a p-n junction in forward bias and reverse bias.

To draw the characteristic curve of a zener diode and to determine its reverse break down voltage.